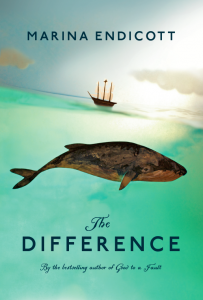 Up from underneath came a blue-black swell, rising in a long arc. Kay waited, hovering in the difference between herself and the whale.

On the Morning Light, a three-masted barque from Nova Scotia sailing the trade winds to the South Pacific in 1911, young Kay feels herself not wanted on her sister’s long-postponed honeymoon voyage. But Thea will not abandon her young sister, so Kay too embarks on a life-changing voyage to the other side of the world.

“It’s 1912, and just off the Pacific island of Pulo Anna, a group of men have rowed out to a Nova Scotia merchant ship to trade with the crew. The exchange involves the sale of a young boy by his people to the captain’s wife, Thea – the pivot around which this extraordinary novel turns.”

The adventure of life at sea has distractions and consolations, and as they traverse the globe, stopping at the various ports of call on the way to China, Kay finds herself perplexed by questions: is there a difference between ourselves and other humans? Between human and animal? How can we eradicate that persistent, illusory difference from our deepest and least conscious minds?

Lovely in its graveness, and in its comedy. The cut of the prose is so keen and the happenings are so finely wrought that it contorts where it can’t help but contort, around the places where unanswerable grief comes into our lives.

At the heart of The Difference is a crystallizing moment in Micronesia: forming a sudden bond with a young boy from a remote island, Thea takes him away as her son. The repercussions of this act force Kay, who considers the boy her brother, to examine her own assumptions—increasingly at odds with those of society around her—about what is forgivable, and what is right.

Inspired by the true story of a Yarmouth woman who bought a little boy in the South Seas, The Difference shows us a now-vanished world in all its wonder—and in its darkness, prejudice and difficulty, too. Endicott brilliantly illuminates our present time through young Kay’s contemplation of the idea of “difference” between languages, people, classes, continents, cultures, customs and species. The Difference is a breathtaking novel by a writer with an astonishing ability to bring past worlds vividly to life while revealing the moral complexity of our own.

“They ended up buying the little boy for four pounds of tobacco. He didn’t know anything. When he saw stairs he started down head first on hands and knees. Of course, he had no manners either! He had to be taught.”

In sailing through a wilderness of new sensations and wonders, vivid and strange, The Difference takes on a deeper and more troubling past. As Kay works to understand how to be in the world, she asks questions that resonate today: what makes us human? How do we atone for unforgivable sins, and make things right?

Globe & Mail review: “Marina Endicott’s The Difference will break your heart (over and over)”

Order at Audrey’s Books in Edmonton, or an independent store near you

Or pre-order the audiobook, read by the excellent Barbara Barnes

ADVANCE PRAISE FOR THE DIFFERENCE:

The Difference is an immersive reading experience, the kind that makes one think, and think again. I loved being at sea with Kay and Thea, and found it hard to part from them. How movingly the novel considers the otherness between people, between the world and us, between human and all other life. Its boldness has a deep humility. Marina Endicott allows her characters to exist without being afraid of their (and our) moral dilemmas and failures, or the gap between our intentions and our understanding. She writes about goodness so well—so beautifully and joyfully. I feel as if I could close my eyes and still be at sea with these characters. A wonderful, brilliant book. —Madeleine Thien, Giller Prize-winning author of Do Not Say We Have Nothing

A beautiful book, so lovely in its graveness, and in its comedy … The cut of the prose is so keen and the happenings are so finely wrought that it contorts where it can’t help but contort, around the places where unanswerable grief comes into our lives. —Helen Oyeyemi